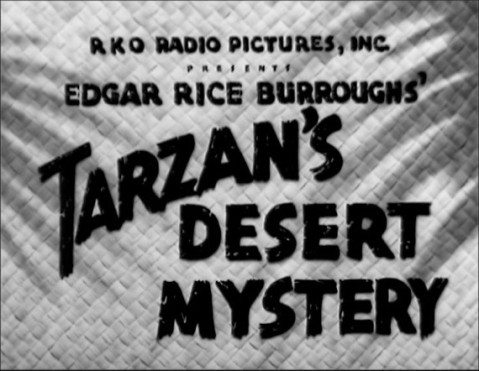 There are movie series that feature giant spiders in recurring roles. With heavy-continuity franchises like Harry Potter and Lord of the Rings, it can be tricky to figure out how to handle the review. It’s a lot easier with the Johnny Weissmuller Tarzan films, which are largely unconnected apart from basic character facts. For the 8th installment, Tarzan’s Desert Mystery, all you need to know is that there’s a guy named Tarzan (Weissmuller) who wears a buttflap. He has a son named Boy (Johnny Sheffield), who is also averse to clothing. Forget about Jane. She’s in England, helping out by working as a nurse.

Actually, the absent Jane provides the motivation for Tarzan to go stumbling into plot. A letter from her sends him on a quest to a deadly forest for medicinal plants for the war effort. Of course, he must first cross a desert, and while doing that he encounters Connie Bryce (Nancy Kelly). Connie is a magician on her way to a desert kingdom, and she’s stranded at an oasis because Tarzan chased off her porters because Tarzan is a giant doofus with the reasoning capabilities of a very small dog. 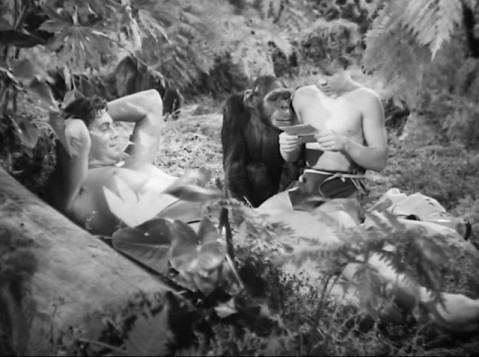 Boy reads from Jane’s letter, changing things here and there.

Chagrined at his mistake, Tarzan agrees to escort her on her journey. Of course, Connie is embroiled in a secret mission to warn the Sheik’s son that his dad’s new advisors are Nazis. Tarzan promptly gets thrown in jail as a horse thief, and Connie is set up for murder by the Nazis. Jane’s medicine is going to have to wait until their lives and escapes are secured.

Connie, on trial for the murder of Sameer, the sheik’s son.

This is a really stupid movie, and I love it unashamedly. Weissmuller is so simple and unassuming in his role, going where he’s supposed to and delivering his short lines with an uncomfortable directness, that it’s hard not to accept him as a guileless and good-natured sort. This, of course, is the opposite of Burroughs’ cultured hero, but it works. His co-star Kelly does the heavy lifting, giving a solid performance as the worldly but honest entertainer. She’s no Myrna Loy (the absent Jane), but really who could be? Incidentally, Kelly later starred in The Bad Seed (1956), which is 6 parts mounting horror and sickening realization and 1 part absurd code-mandated moral ending. Her time with Boy was a lot less emotionally draining.

What I love the most, though, is Tarzan’s single-mindedness. As soon as he and Connie are out of immediate peril, he’s ready to go get the medicine. The only reason the conspiracy gets dealt with is because the villains pursue him and his entourage into the forest. It’s not that he doesn’t care, but he seems genuinely unable to focus on more than one thing at once. Cheetah comes of as a deeper thinker. At least she keeps an eye on the bracelet containing the secret message warning about the Nazis! Although Weissmuller would go on to play Jungle Jim and then himself in much the same type of movies, it was only as Tarzan that his non-acting style came off as something of a plus. I say that as a fan, who finds his woodeness endearing.

Boy examines the map to the jungle medicine.

I mentioned in the introduction that there’s a spider in this film. It’s a treat, especially on the tiny budget I suspect it was built with. The monster is, of course, in the deadly forest. In addition to man-eating plants Tarzan, Connie, Boy, and Cheetah must evade lions, giant lizards, and the pursuing infiltrators. Connie and Boy take refuge in a cave, and if there’s one thing I can guarantee after watching so many spider films it’s that the cave is the natural habitat of giant spiders. Boy promptly traps himself in the spider’s web, leaving Connie to try to fend off the monstrous arachnid with stones. The spider itself is a marvel to behold. It’s an enormous prop, sporting waving legs adorned with spikes. Best of all, the beast itself wraps up the plot. All Tarzan has to do is take Connie back to the kingdom to explain what happened!

The giant spider takes care of the main ‘foreign agent’.

Tarzan’s Desert Mystery isn’t a great film, but it has its charms. If you can take joy in a chimpanzee stealing turbans or an aging Olympic champion galumphing about in a loincloth, then this is probably a must-see. Otherwise it will likely try your patience. This film was the first in which Johnny Weissmuller encountered a giant spider, but it would not be the last. We’ll be taking a gander at a much closer struggle with a vastly less impressive arachnid next time, as the last regular review before this year’s HubrisWeen event kicks off.