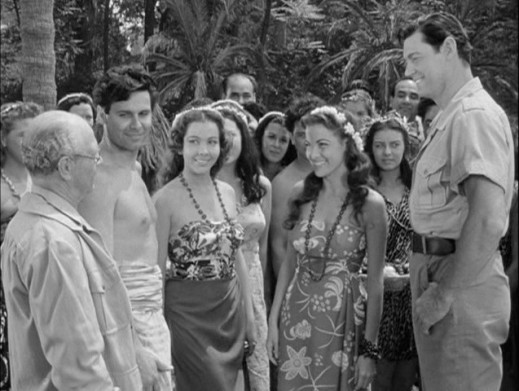 Odds are that if you know about Johnny Weissmuller at all, you know him as an actor who played Tarzan. Maybe you even know about his pockets full of Olympic gold and record-setting competitive swimming career. If you read my last review, you also know he faced a giant spider in Tarzan’s Desert Mystery. Well, my friends, today you’ll learn about his second encounter with a big damn spider, as Jungle Jim in Fury of the Congo.

END_OF_DOCUMENT_TOKEN_TO_BE_REPLACED

There are movie series that feature giant spiders in recurring roles. With heavy-continuity franchises like Harry Potter and Lord of the Rings, it can be tricky to figure out how to handle the review. It’s a lot easier with the Johnny Weissmuller Tarzan films, which are largely unconnected apart from basic character facts. For the 8th installment, Tarzan’s Desert Mystery, all you need to know is that there’s a guy named Tarzan (Weissmuller) who wears a buttflap. He has a son named Boy (Johnny Sheffield), who is also averse to clothing. Forget about Jane. She’s in England, helping out by working as a nurse.