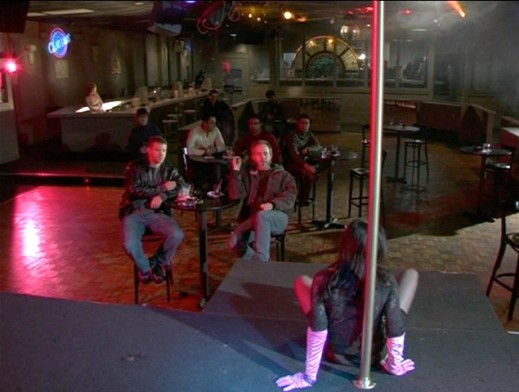 If you’re setting out to review every big spider movie commercially available, you’re going to eventually have to deal with sleazy movies. I’m talking low-budget films with lots of gratuitous nudity and sex, simulated or otherwise. When I did a movie podcast years ago, the episode that broke me was about Jess Franco’s Mari-Cookie and the Killer Tarantula. Two of my friends took my displeasure as a challenge and watched for themselves. One said he’d seen worse but agreed it wasn’t good. The other sent a messenger to kick me in the junk for him. At least I’d earned it.

Gina the bartender is the first one bitten.

Luckily for me Bite Me! is nowhere near that level of awful. In fact, it’s affably stupid and surprisingly enjoyable. It also features terrible dialog and pads its run time with scenes of women stripping. This isn’t surprising for a Brett Piper movie. Attention is paid mostly to bare breasts and creature effects, and everything is just an excuse to display both of them. Another review from the podcast days was his prehistoric giant-spider film Arachnia, so I knew what I’d be in for here.

You had me at Godzilla.

The premise of Bite Me! is that the owner of a failing strip club has died, and his will gave the slime-ball manager 30 days to raise the cash to buy it for a low price. After that, the widow can sell it to anyone else. There are 10 days left, and he doesn’t have the money yet. It’s the perfect setup for a plucky underdog movie, and that’s absolutely not the direction Piper has in mind. Instead the manager has bought some weed that he’s storing on site, and it’s infested with not-spiders.

A not-spider turns out to be a goofy avocado-green thing roughly the size of a tarantula that sucks blood like a tick (but it’s not a tick either). It has eight legs, moves like a spider, makes web, and lays egg sacs — so for our purposes it’s a spider. The venom of a not-spider makes its victims sleepy for a while and removes their inhibitions. If you guess this leads to more stripping and some lesbian sex, then you’ve seen a sleazy film before. Piper keeps the sex under sheets though, so if that’s what you’re after you’ll be sorely disappointed. This is nude comedy, not porn. 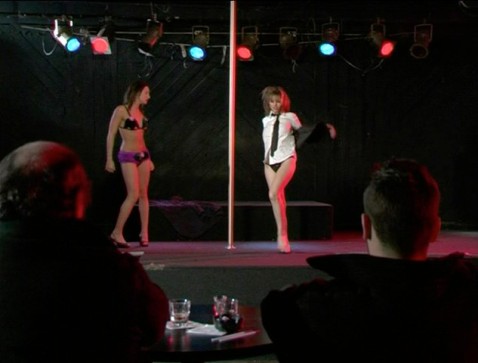 Newly uninhibited Teresa decides to show Amber how to dance.

For me, the attraction is the not-spiders. They’re rendered with a mixture of models and CGI, which works for the most part. It’s no stop-motion joy like Arachnia, but the motion is good and there are only a few moments where the critters are jarringly superimposed. At first the cartoonish faces one the not-spiders were a turnoff for me, but the whole thing is so silly that I had to admit they were tonally appropriate. Me being me, I’d rather have seen more skittering than stripping. From the way the effects surpass the needs of the film, I nearly suspect that Piper would agree.

Where the effects become a let down is with the character who becomes a spider mutant. The reason for this transformation appears to be as simple as “well, the spiders did it after they dragged him off-screen”. They were mutated in the first place because of something the government did to the marijuana, so why not. The first part of the transformation is some poorly applied green makeup, which leaves him looking like he just escaped a taping on for Nickelodeon. After a really bad CGI sequence we finally get a neat insectile humanoid, but it remains a baffling detour in an otherwise linear plot. 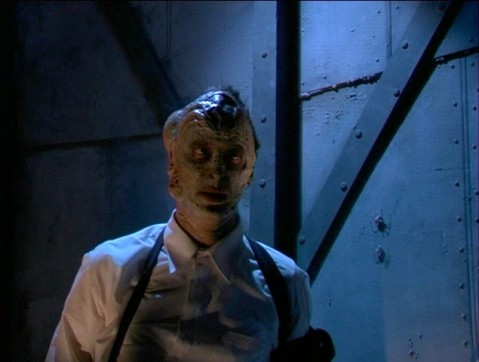 This is not acceptable.

More successful are the giant not-spiders, which are just like the smaller ones but are bigger. The benefit of CGI is that the same model can be inserted at a different scale, so you don’t have to build tiny sets to animate bigger versions. The downside is that the flaws show more. It’s an interesting trick of the mind that the same model, presented at two sizes, loses credibility at the greater mass. At the size of a hand, it’s more acceptable for the creature to slip a bit or not appear rooted onto a surface. When it’s apparently large enough to weigh down an adult, our mind expects it to move with more sense of mass. More attention needs to be paid to placing it firmly within the scene, and slowing its movement even a touch would help sell its greater weight. Still, it’s a better job than I’ve seen in comparable movies, so good on Piper. 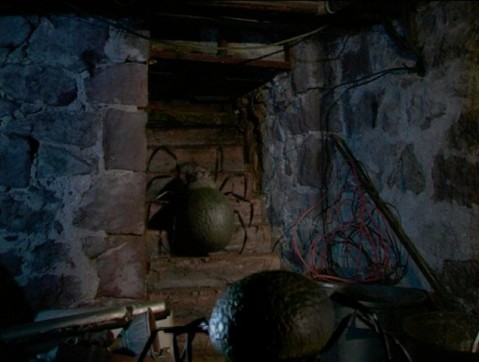 There’s yet another spiderish beast in the film, and it’s the size of, well, a strip club. Spiders and bared bosoms are the only point of the movie, but if you’d rather avoid some spoilers you should move to the next paragraph. The movie ends with our survivors driving away in an exterminator’s van, leaving the club burning to the ground behind them. All that the various attempts to spray the spiders accomplished was to make them bigger, and for some reason the fire adds to this trend. Whatever happened, the stinger ending is that a gigantic spider rises from the burning wreckage. It seems to be just another scaled-up insert of the same not-spider we’ve seen all along. As absurd and unexplained as its presence is, it’s no less sensible than the rest of the movie — which is to say it was pretty close to a perfect ending.

I’ll allow it. Carry on.

Bite Me! resides in a very specific niche of competent but stupid horror movies that aren’t quite craven cash grabs. These aren’t “so-bad-they’re-good” or jaded dares (a la the Sharknado franchise) but deliberate attempts to be silly and entertaining. A more recent example is the unexpectedly fun Zombeavers, about zombie beavers natch. They could be better, but it’s not as though they’re trying to be bad. I consider these movies to be the more gentrified descendants of old horror skin-flicks like Kiss Me Quick! or Orgy of the Dead, which wrapped nude dancing in the trappings of horror with a dash of vaudevillian comedy. Nowadays the horror content takes priority over the nudity, but the non-dimensional characterization and easy jokes remain more or less intact. As I understand the concept of guilty pleasure, movies like this are certainly one of mine.