Papaya: Love Goddess of the Cannibals (1978) 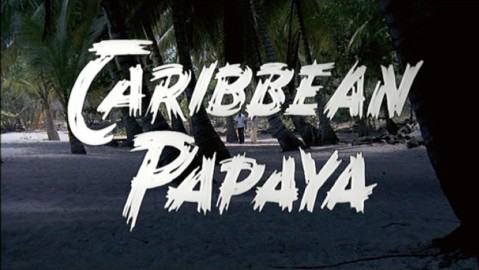 “Caribbean Papaya” is the best translation of the title, but “Die of Pleasure” would be my favorite version if not for the provocative “Papaya: Love Goddess of the Cannibals”.

To me, Joe D’Amato (the main pseudonym of Aristide Massaccesi) is the schlocky director of the barbarian adventure Ator, the Fighting Eagle and the cannibalism horror Anthropophagous. I dearly love these movies, while admitting that they’re fairly terrible. What I knew about but had never sampled was his extensive pornographic catalog. I have now filled that hole in my viewing.

Papaya: Love Goddess of the Cannibals is a title that’s 75% lies. She is neither a goddess nor is she treated like one. What she does is not about love — not love of men at any rate. Her people are not cannibals, although there is a single bite out of a human heart during a ritual. She is named Papaya, so at least one word is true. The Italian title Papaya dei Caraibi is much better and surprisingly non-salacious.

There’s an actual plot here, between the scenes of soft-core heavy petting, and it’s a genuinely good one. A village in the Dominican Republic has been chosen as the site for a nuclear reactor. The locals who’ve been relocated are understandably displeased, and they have organized a resistance movement. Lacking money, power, and representation, they are engaged in a battle of espionage and sabotage. One of their agent provocateurs is the eponymous Papaya (Melissa Chimenti), who employs honeypot tactics to entrap key company employees for the extraction of information.

Papaya uses her favorite snare: getting a ride.

This is not to say that Papaya is the main character. That honor belongs to Sara (Sirpa Lane), an American(?) reporter on vacation. She knows company geologist Vincent (Maurice Poli), a man whose attitude toward the Dominican population is less than charitable. He’s Papaya’s next target, and Sara simply has the misfortune to be with him when he’s captured in a Byzantine trap that involves hitchhiking, an easily repaired broken-down vehicle, the Fiesta of the Round Stone, flowers, and noir levels of curiosity and determination to put himself in danger.

The Fiesta itself is an abbreviated Mondo film, a few minutes of native exploitation to shock the audience. “Tribal” dancing in masks, pig evisceration, a human sacrifice, and plenty of nakedness are paraded across the screen. Dakar (the High Priest of the Spider in D’Amato’s Ator, the Fighting Eagle) plays the leader of the cultish ceremony and can be seen furtively munching on the heart of the sacrificial victim. The nearly-captured Americans watch this through a drugged haze, and I have to say that sounds like a better plan than my plain glass of soda. Maybe I’m too old and have seen too much of this stuff, but I find myself bored by lengthy “are you shocked yet?” sequences.

Hey, someone get Ator! It’s the High Priest of the Spider God!

Similarly, awkward naked groping often leaves me wishing the characters would start singing or kickboxing or just do something interesting. Many genre films are built around supporting the money scenes — the stuff that people came for. Martial arts movies have fight scenes, musicals have songs and dances, action movies have chases and explosions, and sexploitation films have time-outs for sexytimes. I’m about two decades out from thinking nudity makes everything awesome (okay, maybe just two weeks), but even compared to contemporaries like Franco and Rollin, D’Amato sex scenes are dire stuff. Poorly staged, unflattering, and looking for all the world like the actors are thinking about whether their checks will clear. Fortunately Papaya has enough story and weirdness to make it bearable. I saw D’Amato’s The Alcove the same week, and it looked a lot like me working on a jigsaw puzzle on my iPad.