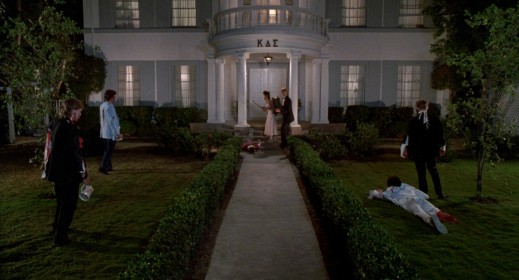 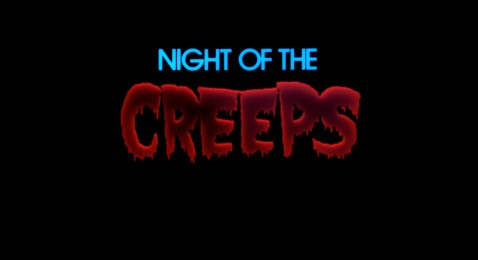 I have a suspicion that the title didn’t help.

Fame can be elusive, and one talent it got away from is Fred Dekker. In a career spanning four decades, he hasn’t written or directed very much. Among his limited output, however, he’s created a good number of cult classics. He wrote the story for House (the American horror-comedy), co-wrote and directed The Monster Squad, and wrote four episodes of Tales From the Crypt (directing two of them). Not everything was great, of course. There was Robocop 3 and his involvement in the regrettable series Star Trek: Enterprise, but what kind of fan would turn down work in either of those franchises? And make no mistake, Dekker is a big fan of monsters and science fiction. It’s not an abusive love, like you get from J.J. Abrams, either. It’s a genuine affection for what came before, which Dekker uses as the foundation for his work. Never is this more visible than in his writing and directing debut, Night of the Creeps. Even the name is a callback to the progenitor of modern zombie movies, Night of the Living Dead. Heck, there’s a Dick Miller cameo, so you know it’s an authentic genre film!

Yes, this is a zombie movie, but they’re not any zombies you’ve seen before. At least, they weren’t in 1986. I’d say that if Slither wasn’t at least partly inspired by this film, then James Gunn’s influences affected him in an oddly similar fashion as Dekker experienced. (Since both films contain numerous genre homages, I’m comfortable guessing that Gunn knew and loved Night of the Creeps.) In both of these movies, the zombies are the result of hostile bodily invasion by space slugs, which is a far cry from the usual causes of shambling corpses. It’s fitting that, by having the slugs control their hosts, Dekker combines the animated dead zombie type popularized in the late 1960s with the predominately mind-controlled form of the previous several decades, producing a unique form of undead. Their memories and desires influence the slugs, but their objective is always to seek new brains in which to lay more eggs. The first zombie, cryogenically frozen since his infection in 1959, goes to the sorority house where his girlfriend had lived. It’s not until his attempt to pitch woo at the window of her old room that his head splits open, ending his unlife as all the slugs pour out. One zombie even manages to keep his wits together long enough to record his findings on the invaders, an action reminiscent of the unfortunate but dedicated Dr. Baines in The Killer Shrews.

Creep at the sorority window.

At this point, I should take a step back and actually explain the premise. Like a lot of slasher movies, there’s a tragedy in the past that plants the seeds for the events to come. The setup is a bit busy, so bear with me. Out in space, an alien ejects a canister from its ship. There’s some dialog from pursuing aliens, which reveals that the canister contains a dangerous experiment. It is, of course, filled with the slugs, and it lands near the campus of Corman University in 1959. College sweethearts Pam and Johnny drive to where it fell, ignoring warnings about an escaped lunatic in the area. They park, and Pam waits nervously in the car while Johnny searches the woods. Their date ends with him getting a face-full of slugs and her getting axe-murdered by the lunatic. 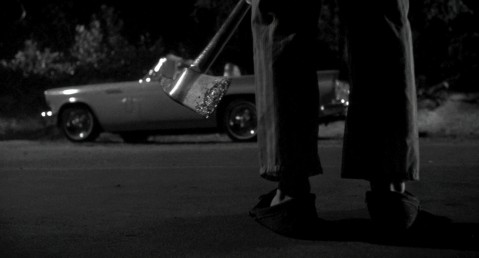 The escaped maniac finds his next victim.

Fast forward to 1986, when Chris Romero (Jason Lively) and J.C. Hooper (Steve Marshall) are trying to join the Beta Epsilon fraternity because Romero believes it will impress Cynthia Cronenberg (Jill Whitlow), a member of the associated sorority Kappa Delta Sigma. The boys are told that they might be considered for pledging if they put a corpse in front of the Phi Omega Gamma house. In looking for a dead body, they stumble into a cryogenic lab, where Johnny remains frozen. They manage to get him out of his chamber before running away, and the crisis avoided 27 years ago thaws on the floor of the lab. 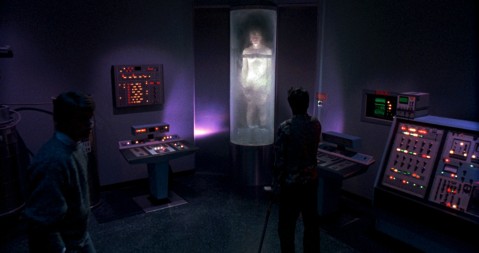 It’s not just undead Johnny that connects the plague of zombies to the past. Detective Ray Cameron was only a fresh recruit when he’d called to scene of Pam’s murder. They’d dated in high school, so her murder affected him even more deeply. Johnny’s body turning up again amid a strange new rash of gruesome deaths and the apparent return of Pam’s killer sends Detective Cameron into a tailspin, even as Romero is coming to rely on him for help in stopping the parasitic outbreak. Cameron’s character arc may seem like unnecessary filler, but it serves two important purposes to the film. The first is that his decades-long trauma is absolutely essential to the climax. Certainly, the story could have led elsewhere without the gruff and depressed officer, but it’s a bit more powerful for his part in it. Secondly, Atkins can deliver the inane catchphrase “thrill me” more convincingly than most of the cast manage actual lines of dialog. I wouldn’t say the leads did a bad job, but a lot of their lines drop like bons nots. Dialog wasn’t Dekker’s strength right out of the gate, it seems.

The slugs bring the maniac back to life.

Overall it’s an impressive first film. There’s ambition and breadth on display, and although a touch chaotic it never gets out of Dekker’s control. The writer-director’s passion powers Night of the Creeps through any shortcomings, leaving only fun in its wake. Just one word of caution. There are two endings to the movie. The theatrical version is a typical zinger ending from the era — everything’s fine, then jump scare! It’s not bad, but it’s pretty standard stuff. The director’s cut takes a little more time, has a much more interesting twist, and remembers that the whole thing started on a spaceship. Clearly, I recommend the director’s cut.