Wes Craven’s A Nightmare on Elm Street came out in 1984, creating the relentless killer who became the sole speaking member of the Unholy Trinity of 80s Slashers. Together with Jason Vorhees and Michael Myers, Freddy Krueger captured imaginations and box office with flamboyant murders and the inability to stay dead for long. Sequels were on such a fast track that only 7 years after the original Freddy movie the 6th one was released. Freddy’s Dead: The Final Nightmare was not, of course, the end of Freddy Krueger. It wasn’t even the last time that the character would be portrayed by Robert Englund. But it was the last of the original sprint of Nightmare movies.

This time around Freddy sets into motion a plan to escape Springwood. With no children left, the town is desolate. Childless couples fawn over anyone playing a teenager who happens to come into town. It’s no longer a playground suitable for the dream assassin. Freddy has tracked down the last surviving youth, and uses him to lure more to the town. The fact that this succeeds is actually one of the least ludicrous things about the script.

The Krueger house, where he home fires never go out.

The story goes that there was a draft of the script written by Peter Jackson, but that it was thrown out by Rachel Talalay. In a brief conversation online she told me that she never saw it, if it did in fact exist at all. I’m inclined to believe her. As quickly as these sequels were churned out, it seems unlikely that anyone would have gummed up the works by quibbling over an existing script. Instead, she and Michael De Luca whipped up a script and kept the wheels turning. It’s what happens when a studio demands a new sequel every year, and the film stands as a fitting symbol of why the series needed to end.

Yaphet Kotto explains that this poster will have far too much to do with the plot.

One of the worst things about the previous film had been the decision that the needed to see Freddy’s mother being raped by “100 maniacs”. In fact the more the series tried to provide backstory for the villain, the worse it got. In this movie, it’s not enough that Freddy was the bastard rape-child of 100 maniacs who tortured and killed children before being burned alive by angry parents and became a dream stalker. Now it turns out that he is powered by demonic refugees from a head-banging mid-1980s album cover, which gave him his abilities to something something. I honestly don’t care.

The demons, in disastrous 3D, strike a bargain with Freddy Krueger.

Certainly as bad, if not worse, is the 3D. There’s a point where a character puts on 3D glasses before going into the dream world, and from then on the point of the movie is to waggle things at the audience. Having recently rewatched Jaws 3, I can certify that this isn’t as awfully implemented; it’s just ham-fisted. Linking it to something in the story could have been interesting, if there’d been even a semblance of a point to it. The glasses don’t do anything though. Even 13 Ghosts managed to give a reason the actors were putting on the glasses, and that was just a shameless gimmick.

One of my favorite moments of the film. A news photo of Freddy’s wife comes to life.

On the plus side, we’re treated to Yaphet Kotto in a supporting role. He plays the head of the home for troubled teens with hearts of gold. All of the dream strategies come from him, and he’s the source of the unfortunate explanation of the dreamons. Still, Yaphet Kotto got a paycheck, and I am here for that. 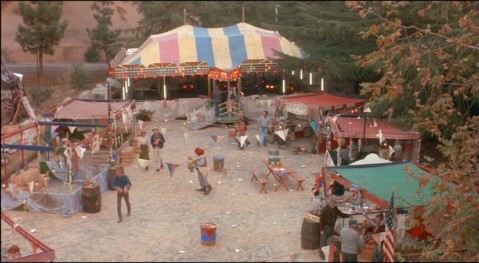 With all of the effects and killer set pieces, this shot of the Springwood fair is the creepiest one in the film.

This film is the first time we hear that Freddy has a kid. It’s not a bad plot beat, and the movie uses it fairly effectively. There is a clumsy scene that reveals a child’s drawing signed by “K. Krueger”, which is an absurd way for a young child to sign something, but it’s not a deal breaker. It gives a nice opportunity for a rejection of heredity, which plays out reasonably well.

I mean, really. What kid ever signed that way?

In a franchise filled with lousy movies, Freddy’s Dead fits like a glove rigged with knives. It’s got some great ideas along with the bad ones, and while there aren’t many kills the ones we get are mostly entertaining. Hell, one of them is among my favorites for the series. While not outstanding, it is perfectly serviceable. Going out on a high note would’ve been great, but mediocrity is arguably more than was warranted here. I’d watch this any day over the terrible 2010 reboot.