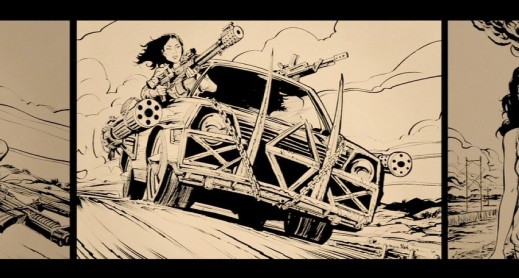 Who doesn’t love a good apocalypse? Since at least the days of science fiction films like The War of the Worlds movies have presented us with stories of threats to our way of life, whether through war, disease, environmental catastrophe, the risen dead, or killer plants from outer space. While some wallow in nihilism, most of them reaffirm or faith in humanity’s ability to overcome hardships and rebuild. Even when there are few characters the implication is that they represent society, so their success heals all. Best Friends Forever follows two young women on a road trip from Los Angeles to Austin as the nation reels from a nuclear attack. It’s a very personal apocalypse, and it emphasizes the significance of a single relationship against the background of a nation’s collapse.

It’s not talking about the bombs.

The protagonists are close friends Harriet (Brea Grant) and Reba (Vera Miao), and they’re making the trip from California to Texas to enjoy a final few days together before Harriet starts grad school. Four cities are destroyed by nuclear explosions while they’re on the road, and although their trip saved them from the annihilation of LA the lies between them threaten their friendship. While the aftermath of the attacks provides extra danger for the pair, it’s their relationship that matters most to both them and to the movie.

“You’re exactly where you’re supposed to be.”

This is hardly unique in itself. A lot of apocalyptic movies feature a relationship as a driving force. Things like The Day After Tomorrow and the Tom Cruise version of War of the Worlds have main characters seeking loved ones in the wasteland. Turbo Kid and the sequels to Mad Max emphasize coming together to defeat a powerful enemy. These all involve the importance of protecting or creating bonds with others but the focus of all of them is on action and survival. While Best Friends Forever contains a few serious encounters, they remain within realistic threat levels — just a few ordinary people with bad intentions. Throughout, the emphasis is on the what the women do to protect each other and their friendship. 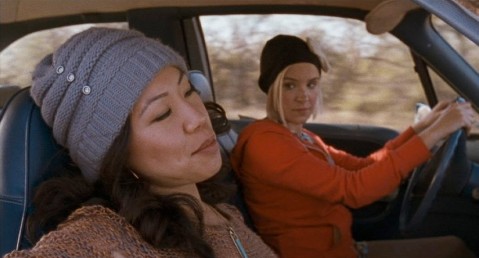 Harriet and Reba on the road.

I’m hard pressed to think of another apocalyptic movie that does this. It’s a relationship drama that happens to take place as society collapses. What’s most intriguing while watching it unfold is how their dialog changes through the course of events. At the beginning, Reba and Harriet mostly talk about boys. Their conversations are shallow by design. Both of them have weighty issues to discuss, topics that could shatter the trust between them, and so they prolong their friendship through avoidance of deeper subjects. As the effects of the attacks catch up to them, they begin to reveal more of their secrets until their arrival in Austin drops the final bombshell.

End of the road meets end of the world.

I really like this movie. It’s an atypical end-of-the-world story and a solid one. Ultimately Harriet and Reba heal only each other, but in the personal scope of the film that’s enough. The rapport between Grant and Miao feels very natural. It should, since the two of them wrote Best Friends Forever, but if Bugsy taught us anything it’s that real-life chemistry doesn’t always translate to the screen. Grant does a fine job in her first directorial outing, and I’ll happily give anything else she makes a try. Just so long as she’s upfront about.

The Beast With the 1,000,000 Eyes — Micro-Brewed Reviews
Brides of Blood — Yes, I Know
The Bye Bye Man — The Terrible Claw Reviews