A Report on the Party and the Guests

The word ‘brave’ gets used a lot. Bakery owners are brave for refusing service to homosexuals and then slandering them online. Citizens are brave for responding to Black Lives Matter protests with clarification that Blue and All matter as well. Donald Trump is brave for saying the openly racist and xenophobic things that “everyone is thinking”. Yes, there’s a lot of bravery in defending the existing power structures against those who’d like to be treated as human beings. For a real example of bravery look at Jan Nemec and the cast and crew of A Report on the Party and Guests.

The story of the film is simple and rather perplexing in itself. A group of men and women enjoys a picnic on their way to a party. When they pack up to continue on their way, they are surrounded by men under the command of a gregarious fellow named Rudolph. The captives are made to follow arbitrary and pointless rules until the party’s Host arrives. Also outgoing, but more restrained, this man chastises Rudolph and takes everyone along a shortcut to the site of the party: a lake where tables have been set up for a fancy banquet. Everything starts to fall apart when one of the picnickers leaves, and the film ends with the majority of guests running off to bring him back. 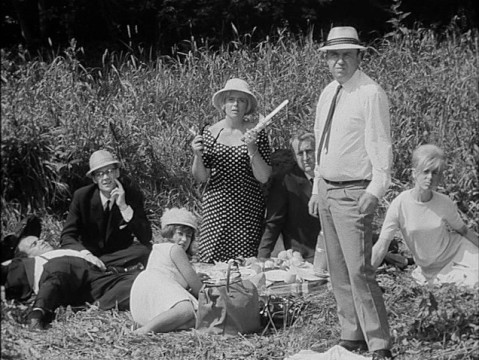 The picnic-goers watch a wedding party go by.

Here’s where context matters. This film was made in the Czechoslovak Socialist Republic (what those of us alive during its existence called Czechoslovakia) as part of the Czech New Wave movement. Like many films in this period, the goal was to inform the audience that they were part of a system that oppressed them. This, of course, was a bold message to promote from behind the Iron Curtain, and in just a few years the liberal reforms of Prague Spring brought the hammer and sickle of the Soviet Union down on the republic to bring it back in line. Jan Nemec fled, and A Report on the Party and Guests received a prestigious lifetime ban.

The site of the Host’s birthday party.

What was so dangerous about this almost surreal movie? The dialog makes it perfectly clear that Rudolph and the host are an allegory for the capricious authority of the soviet leadership. Not only that, but the process of Party indoctrination turns the guests from idealistic bourgeoisie to willing enforcers and apologists for those in charge. The film lays out how those in charge depend on the people to oppress themselves. 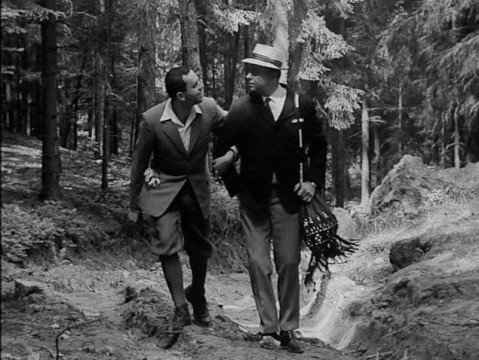 Rudolph arrives to escort the guests.

Take a simple example. During the picnic, a woman tells one of the men that she thinks he was right about everyone seeing things differently. She observes that “We can’t all be ruled by the same opinion,” and he agrees. By the end of the film, this man has a seat of honor on the right of the host, and he assumes the task of making speeches aimed at inspiring the other guests to do what the host and Rudolph desire. He’s gone from advocating free thought and action to being a propagandist for the central authorities.

The Pacifier delivers a speech to inspire the guests to hunt down his friend.

All rule starts with the Host, much as the power of soviet bloc countries begins with the Central Committee or the Party Congress of the Soviet Union. Rudolph, adopted by the Host just the day before, is empowered to carry out his father’s mandates in whatever manner he pleases. This matches the soviet model of trickle-down governance, with more local leaders implementing the decisions from the centralized authority. It’s then on the rest to keep each other in line, taking their cues from the reactions of those above. Indeed, the guests are eager to help identify who caused the seating mishap that resulted in all them getting up to relocate.

The guests wait as Rudolph’s men assemble his “office”.

The greatest demonstration of the complicity of the oppressed is their introduction to Rudolph’s rule. Having been escorted to a stone-filled clearing by Rudolph and his toughs, the guests watch in bewilderment as a desk and chair are brought in for Rudolph. He tells them that they’re standing too close together and asks them to spread out. The one who becomes the propagandist (at this point my notes refer to him as The Pacifier) coaxes them into well-defined queues separated by gender, to the great pleasure of their captor. Rough lines are marked around them and pairs of rocks are placed on the outlines. They’re told that these all walls, with the rocks defining the doorways. After the guests begin at last to bristle at their treatment, Rudolph reveals that it’s all been a joke. One of the guests leaves, walking through the “wall’, and is immediately set on by Rudolph and his toughs, who rough him up in the name of retrieving him. 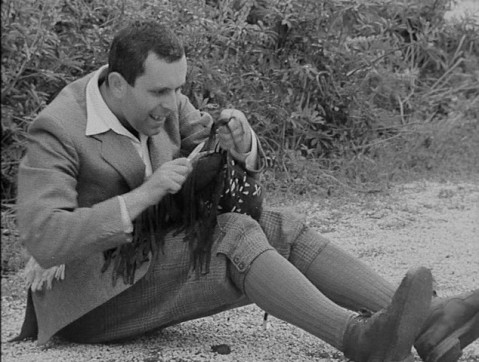 Rudolph petulantly cuts the decorative fringe off of the departing guest’s bag.

Here’s where the conditioning to authority really comes out. The remaining guests stay in their imaginary confinement while their friend is being bullied. They protest apologetically, but they stay put and don’t try to help him or flee themselves. When the Host arrives on this scene and begins to rebuke Rudolph for the violence, it is significant that the guests feel emboldened to leave their confinement yet take pains to use the demarcated doorways. They also explain to the Host that Rudolph had only been playing a joke and that their friend hadn’t been amused. With them taking their tormentor’s side the Host is free to dismiss the incident, and Rudolph is restored to good graces and full trust and authority. Even the one who was attacked allows that it was all a misunderstanding, although he later attributes the departure of another guest to lingering resentment on his behalf.

I only realized while taking screenshots that the Pacifier is always staring at women. Early on, he spies on his friends freshening up in a stream. Here he’s watching a young woman scratch her thigh, raising her skirt to do so.

What makes A Report on the Party and Guests work so well is that despite the strangeness of the setting and events, it’s rooted in keen observation of human behavior. Although strongly based on the Soviet power structures, the social dynamics of acculturation to abuse are a part of any unequal system. Those of us who grew up in dangerous environments recognize the eagerness to appease an authority figure before mild annoyance can grow to something threatening. The Host is watched very carefully by all, and everyone attempts to keep him happy, but it’s not always easy to guess his desires. He’s passive-aggressive you see, so while everyone can see that he’s upset nobody can guess why. When he starts complaining about how there’s no extra chair for the missing guest, it’s because he’s angry that someone left. Nonetheless Rudolph wastes time trying to find the missing chair, taking the Host literally. It takes a few more hints before Rudolph suggests that he could find the one who left. At that point, clearly pleased, the Host claims not to be concerned about it personally, but if it’s important to Rudolph…

The Host complains that there should be an extra chair if a guest left.

This movie scares the hell out of me. The ways that people react to authoritarianism are very real, and we’ve seen in this American presidential election how many will fall in line behind a candidate that uses strong-arm tactics. There’s nothing unique to Eastern Europe that allows for the rise of a totalitarian regime; indeed, they crop up all over the world. The responses that give power to such authority spring from human nature. It can even come out of a democracy, originating from a party that claims to stand for the decentralization of power.

This review is an entry in the Celluloid Zeroes Political Science Fiction Roundtable. Check the other reviews at the links below.