When The Rocky Horror Picture Show came out in 1975 it wasn’t exactly a hit. The continued midnight showings and growing fan base eventually got the notice of studio executives, which led to a predictable but terrible decision: cash in with a sequel! So it was that in 1981 the bizarre film Shock Treatment dropped like a bomb on baffled audiences.

Brad and Janet, now played by Cliff De Young and Jessica Harper, have settled down in their hometown of Denton, having put their adventure with the Transylvanians behind them. Brad was more than happy to return to a mundane life, but Janet misses the spark they used to have. When this is brought out by a marriage-counseling game show, Brad is sent to the Dentonvale psychiatric institution. There’s no overt alien presence, no horror, no science fiction — nothing to connect it to the first movie except for a certain style and characters named Brad and Janet. Nothing except for the writer, director, some supporting actors, costume designer, composers, a threat to the Majors’ marriage, and general raunchy glee. 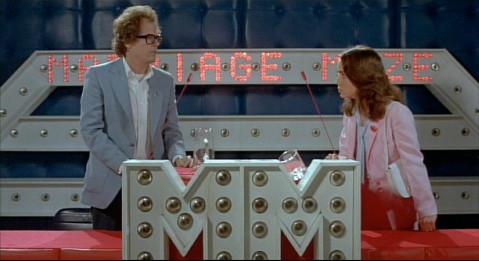 Brad and Janet appear on the Marriage Maze show.

Let’s discuss the returning cast first. Richard O’Brien and Patricia Quinn again play siblings, although not from Transsexual Transylvania. They are Drs. Cosmo and Nation McKinley, operators of Dentonvale, and they are using the latest in a string of false last names (always that of a US President). Clearly they’re criminal, but we never learn their scheme because they’re now acting on behalf of the film’s villain, Farley Flavors (Cliff De Young, in his second role). The McKinley’s don’t do much beyond locking up Brad, but they have good bits in some of the musical numbers. Nell Campbell is also at Dentonvale, as the head sexy nurse. Charles Gray comes out from behind the desk as Judge Wright, one of the few people who works to save the Majors’ marriage. Jeremy Newson reprises his role as Ralph Hapschatt, who you probably don’t remember. Lastly, three of the Transylvanians show up: Perry Bedden and Rufus Collins as camera crew and Imogen Claire as the wardrobe mistress. They aren’t really relevant, but I thought that was cool.

Flavors is a goddamn Ace.

It’s a shock to see Brad and Janet recast, but the new actors are really good. De Young had actually been offered the role of Brad for The Rocky Horror Picture Show but couldn’t take it at the time. His interpretation is less stiff but just as socially inept. Of course, since Brad is in a cell for most of the film there isn’t much need for social graces. As for Janet, I’m ecstatic that Susan Sarandon declined to reprise the role because it let Harper step in. Harper starred in the 1970s horror classics Susperia and Phantom of the Paradise, and she had an important supporting role in the amazing and depressing Pennies From Heaven. Here she gets to showcase her singing, and she’s absolutely terrific. If Tim Curry was the standout performer in the first movie, Jessica Harper owns the sequel.

Special mention must be made of Barry Humphries. Perhaps best remembered today as Dame Edna Everage, Humphries plays Bert Schnick. Schnick is the bizarre emcee of “Marriage Maze”, the show that consigns Brad to Dentonvale. Inspired by Conrad Veidt in The Cabinet of Dr. Caligari, Humphries uses exaggerated gestures and expressions — easily making Schnick the most dynamic character in the film. Schnick loses all relevance to the plot once Brad is carted off, but his oddness makes him more memorable than his importance would justify. He’s always at the edges of things, a weird and spastic presence taking voyeuristic pleasure in the proceedings while pretending to be blind. The most unnerving moment in the picture is when the camera pans across a bank of bedroom windows at night, revealing most people sleeping or having trysts while Schnick merely sits grinning in the darkness. In that moment you suspect that he’s not merely odd but genuinely inhuman. 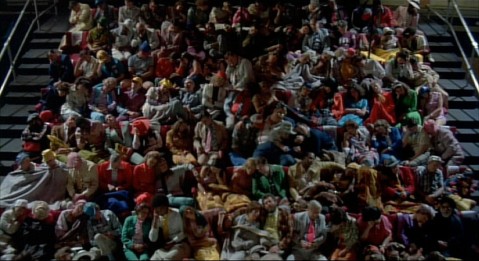 Denton, itself, is not a normal town. It’s more of an idea of a town, and that idea is created for television. To be precise, it’s created for channel DTV. At the beginning of the movie, the doors of the DTV studio are opened and the audience/residents are let in. It’s a bit like the opening of Jesus Christ Superstar, except that (as the first song informs us) Denton has no pretensions. Conceptually, it’s a bleak setting. Television has become the entirety of life, and everyone wants to be in front of the camera. Why wouldn’t they? That auditorium seating can’t be comfortable, especially to sleep in. But in front of them, the drama and excitement of real life plays out before them in the fabricated reality of game shows, soap operas, and variety hours. Thus, Janet’s slight dissatisfaction with Brad’s boring ways becomes exaggerated as fodder for entertainment just as much as to serve the schemes of DTV’s sponsor, Farley Flavors. 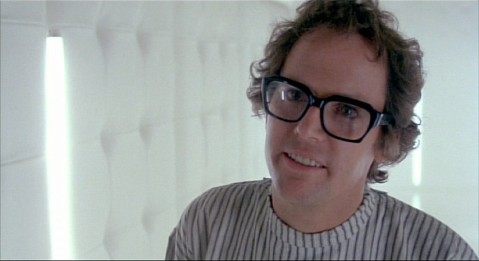 Flavors is a fast food tycoon with messianic aspirations. He intends to combine junk psychiatry with religion in order to control the DTV audience even more completely, in a scheme that has just enough serial numbers filed off to prevent it being indisputably a comment on the Church of Scientology. What he really wants is Janet — not for her talents, personality, or anything actually about her but as a way to prove supremacy over Brad. It’s his machinations that lock Brad away and distract Janet with sudden fame, but two cast members from a cancelled show have decided that it’s time to finally foil Flavors.

It’s an intensely silly movie, yet it touches on some issues that we still struggle with. Reality TV has, of course, not only all but taken over the old networks but has made celebrities out of people for being awful on film. The self-absorption in Janet’s TV debut number “Me of Me” is celebrated in many of these shows. Toxic masculinity and racism is ridiculed when Mr. Weiss goes outside to mow after hearing that a friend’s son had sex with Mexican men. As he uselessly trims the AstroTurf, he sings the jaw-droppingly over-compensating “Thank God I’m A Man”. Even the seemingly ridiculous “Bitchin’ In The Kitchen” captures the growing tensions when a couple feels more comfortable communicating with their appliances than with each other. Hold up, that actually is pretty ridiculous.

All in all, Shock Treatment is a bit of a mess, but it’s a glorious one. Production problems and several re-writes left their mark, but there’s real heart that survived the process. The combined forces of Judge Wright, Betty Hapschatt, and the house band Oscar Drill & the Bits form the moral center of the film. In the artificial world of DTV, they alone value Brad and Janet for the authenticity they represented when together. Of course, the inability to film on location in the US or locate a town in England that looked suitably American led to the remarkable decision to set it all inside of the studio, a choice that helped give the movie its distinctive look and made visible the control that television has over Denton. Maybe that’s why I love this one so much; as unions went on strike and actors bowed out, they just kept going forward. Like the final song says, “We’re going to do it anyhow, anyhow.”